Learn to Become a Pro Sideline Reporter – from a Pro Sportscaster 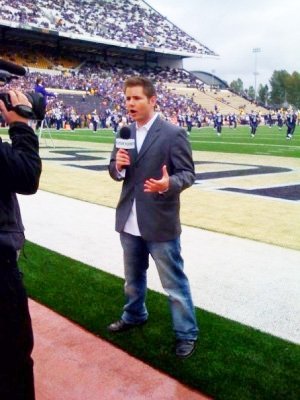 If you love to be smack dab in the middle of the action in sports, sideline reporting is the sportscasting job for you. And Sportscasters Mentoring Group (SMG) is the broadcasting school to teach you to do it.

Reporting from the Battlefield

Sideline reporters are the frontline soldiers of sportscasting. While anchors and analysts sit comfortably in a booth, sideline reporters are right on the edge of the turf, boards, or ice, positioned near enough to touch the players. It’s the closest thing in broadcasting to being in the game. It’s also a great stepping stone to booth or network anchoring.

So it’s no wonder so many aspiring sportscasters want to land sideline reporter positions. But how do you get there? If you’ve tried, you realize that just knowing sports is not enough. Instead, you have to know a whole lot more.

We’re Sportscasters Mentoring Group (SMG), the one and only all sportscasting training program in the nation. And we can teach you all you need to know, quickly, affordably, and right in your local area.

We do it through the mentor-apprentice training model. It’s a classic way to teach new skills that pairs an experienced professional with a newcomer, right in the actual workplace. And we’ll explain the process below. But first, what are you going to learn?