Learn to Become a Sportscasting Color Analyst … from a Pro Sportscaster

Let America’s Only All-Sportscaster Training School Teach You the Secrets of Being a Successful Sports Analyst, in a Working Radio Station Right in Your Area 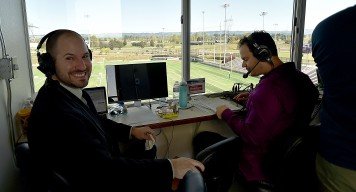 If you know the workings of any major sport inside and out, that knowledge can make you a sportscasting color analyst. Why are analysts (sometimes called color commentators) among the most important of sportscasters?

The best way to answer that is to recall the dramatic ending of Super Bowl XLIX:

As every NFL fan remembers, some not so fondly, the Seattle Seahawks were just a half yard from scoring the winning touchdown over the New England Patriots. All Seattle coach Pete Carroll had to do was call for a quick running play and he’d likely get his energy drink shower, the Lombardi Trophy, and a place in history.

Instead, he called for a pass.

As stunned Seahawk fans watched in horror, the Pats intercepted and Seattle lost a championship they should have won. In the TV booth, an anchor cried out, “I don’t understand that call at all! I just don’t!”

Explaining Why Seattle Did it

Color analysts could and did explain it. They cited how past stats showed that running plays in that situation were often stopped at the goal line. They described how a short slant pass had often worked better. Or, if incomplete, they explained how a pass would stop the clock to allow multiple later runs. In other words, Coach Carroll had real reasons for his decision, even though many fans did and still do disagree.

Could you have explained Carroll’s move? To do so, you’d need to know sports like no ordinary fan does. You’d have to know the game like someone inside the game.

That’s why many analysts are former players or coaches, and why names like Troy Aikman, Curt Schilling and Walt Frazier sit in the broadcast booth in the analyst role.

If you’ve got that kind of knowledge and experience, you’re a candidate for a color analyst position. But the job is not just about sports expertise, it’s also about skilled broadcasting. So you must be able to communicate your knowledge effectively to the fans listening on the radio or watching on TV.

That’s where we come in.

We’re Sportscasters Mentoring Group, the only all-sportscaster training school in the country. And we’ll teach you those broadcasting and communication skills—quickly, affordably, and in a way that gives you the best shot at landing an analyst position.

We do it through the mentor-apprentice training model. It’s a classic way to teach new skills that pair an experienced professional with a newcomer, right in the actual workplace. And we’ll tell you how we do that below. But first, here’s some of what you’re going to learn: