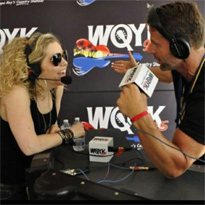 Be a
Play-by-play Announcer 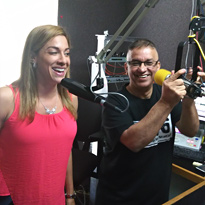 Be a
Sports Talk Host 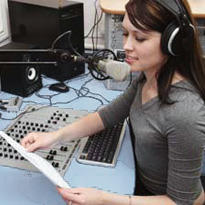 Be an
Update Anchor 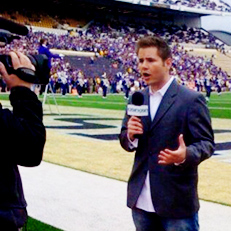 Be a
Sideline Reporter

What sports lover wouldn’t want to be a play-by-play announcer?

After all, you’re in a booth right on the 50 yard line, or behind home plate, or you’re seated right at courtside, trackside, or ringside, attending your favorite game. These locations can cost fans thousands of dollars, but you’re there for free.

And what do you get to do there?

Watch every bit of the action up close and personal, then tell the TV viewing or radio listening world about every hit, kick, pass, touchdown, tackle, dunk, or punch. And get paid for doing it!

That’s the world of the professional play-by-play sportscaster.

Top play-by-play announcers are among the stars of ESPN, NBC, CBS, ABC Sports, and other major broadcast organizations. They travel the world first class and get to attend all the big events. Some are as well-known (and well-paid) as the players in the games they cover.

How to Become a Play-by-Play Sportscaster

It’s no wonder so many aspiring sportscasters want to land play-by-play positions. But how do you get there? If you’ve tried, you realize that just knowing sports is not enough. The fact is, you have to know a whole lot more.

We’re Sportscasters Mentoring Group (SMG), the one and only all sportscasting training program in the nation. And we can teach you all you need to know, quickly, affordably, and right in your local area.

We do it through the mentor-apprentice training model. It’s a classic way to teach new skills that pairs an experienced professional with a newcomer, right in the actual workplace. We’ll explain the process below. But first, what are you going to learn?

You’ve listened to pro play-by-play announcers. The good ones seem to tell you exactly what you need to know, just when you need to know it. And they make you feel like you’re right in the arena, seeing, hearing, even feeling the excitement.

And perhaps you’ve also listened to some not so good play-by-play announcers. They stumble and bumble and confuse you, especially if, like many listeners, you’re driving or at work or doing other things while the radio or TV is on. You don’t know if your team is ahead or behind, how much time is left on the clock, maybe even who made the play, or which team did it.

The difference is that good play-by-play sportscasters know the secrets of the job, developed over years of experience. We’re going to teach you those secrets, including:

You Need Broadcasting Skills, Too

Reading that list, can you recognize some of the things top notch play-by-play folks do? Well, you’ll learn to do them too … from a professional sportscaster, because who’s better to teach you than someone who’s done it?

But that’s not all you’ll learn with SMG training. We’ll also teach you the broadcasting skills you need, including:

Without these skills, even if you land a broadcasting job, you won’t last long doing it.

How SMG Makes You a Play-by-Play Sportscaster…